Errors are useful, innovate using them. 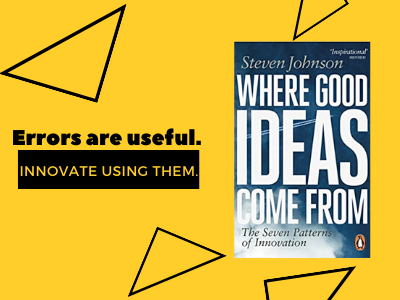 Summary
As software test practitioners we revel in finding bugs,  and as managers and engineers we are focused on fixing these. Steven Johnson in his book “Where good ideas come from-The seven patterns of innovation” devotes a chapter on errors as a source of innovation. This article summarises key ideas from this outlining how erroneous hunch changes history, how contamination is useful, how being wrong forces you to explore, how paradigm shifts with anomalies and how error transform into insight.

Brilliant software testing is interesting, kinda like Star Trek, going into the unknown. It requires discipline, creativity, logic, exploration skills, note taking, observation, association, hypothesising, proving and  juggling multiple hats frequently. It is not a mundane act of finding bugs and getting them fixed. It is just about scripting and running it to death. It is about exploring the unknown, driving along buggy paths, discovering new ideas, suggesting improvements, enhancing experience, embedding testability and having the joy of creating beautiful software by looking at the interesting messiness.

When I read the book “Where good ideas come from – The Seven Patterns of Innovation” by Seven Johnson, I was delighted to know that one of the patterns was “ERRORS”. An entire chapter on this was a treat to read. As a test practitioner I have always meandered along the paths of anomalies, understood implementation and intentions deeply, and have come up with interesting suggestions to improve and enhance experience. Errors have been my best partner in perfecting what I do and coming up with interesting ideas.

An erroneous hunch changed history
The strange correlation between the spark gap transmitter and the gas flame burner turned out to have nothing to do with the electromagnetic spectrum. The flame was responding to the ordinary sound waves emitted by spark gap transmitter. But because De Forest had begun his erroneous notion that the gas flame was detecting electric signals, all his iterations of Audion involved some low pressure gas inside the device that severely limited its reliability. It took a decade for researchers at GE to realise that triode performed best in vacuum, hence the name vacuum tube. The vacuum tube, the precursor to the stunning electronics that would sweep the world n in the next few decades was born from an error. De Forest watching the gas flame shift from red to white when he triggered a surge of voltage through a spark gap forming a hunch that gas could be employed as a wireless detector could be more sensitive that anything than anything Marconi or Tesla had created to date. An erroneous hunch changed history.

Contamination is useful
Alexander Fleming discovered the medicinal virtues of penicillin when the mould accidentally infiltrated a culture of Staphylococcus left by an open window in his lab. Antibiotic was born. A bunch of iodised silver plates left in a cabinet packed with chemicals by Louis Daguerre formed a perfect image when the fumes spilled from a jar of mercury. Photography was born. Greatbatch grabbed the wrong resistor from the box while building a oscillator and found it was pulsing a familiar rhythm. Pacemaker was born. Contamination is useful.

Transforming error into insight
Anro Penzias and Robert Wilson thought noise in the cosmic radiation was due to faulty equipment until a chance conversation with a nuclear physicist planted the idea that this may not be the result of faulty equipment, but rather the still lingering of reverberation of big bang. It changed the opinion that the telescope was the problem. Coming at the problem from a different perspective with few preconceived ideas about what the correct result could be can enable one to conceptualise scenarios where the mistake might be actually useful. Transforming error into insight.

Truth is uniform and narrow, error is endlessly diversified.
“Perhaps the history of the errors of mankind, all things considered, is more valuable and interesting than of their discoveries. Truth is uniform and narrow; it constantly exists, and does not seem to require so much an active energy, as a passive aptitude of soul in order to encounter it. But error is endlessly diversified.”