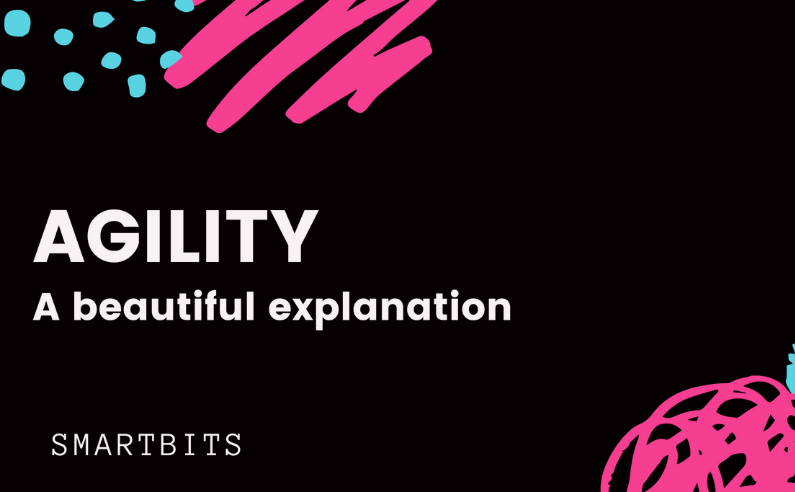 Tathagat Varma in discussion with T Ashok (@ash_thiru on Twitter)

Tathagat Varma beautifully expounds as to what is Agility is. He says agility is actually the ability of an organization, in some sense taking a biological definition, somebody or a unit which has an ability to respond to the external stimuli and ensure that their own survival is assured.

The video of this “nano learning” smartbits video is available here.

Question: During my discussions with companies who say they practice Agile development, they quickly add as to what they practice is ‘my Agile’. Now I am lost. Are we abusing this term and using Agile as a fashion statement?

Agility to me, is an organization’s innate capability to survive and thrive in the long run. If we take a very biological definition of that, every organism is at different stage of its evolution. As a human being, if I am a toddler, I am in a crawl-walk-run stage. My agility when I’m crawling on the floor will be very different than my agility when I am running or walking or even flying for that matter. So, I think we have to really take the ‘horses for courses’ strategy.

Some people might abuse it and that’s why they say, this is ‘my’ agile. If I take a very holistic perspective on that,  if there are five people or five teams with different capabilities, but they all follow the same process and say this is ‘our’ agile process, I would say something is wrong with that. What is being agile to one may not be of a similar or comparable perspective to another one.

So to me, in a very simple sense, agility is actually the ability of an organization, in some sense taking a biological definition, somebody or a unit which has an ability to respond to the external stimuli and ensure that their own survival is assured. So agility is actually an ability of a body to respond commensurate to the external stimuli and make sure they remain alive, they are able to deal with the issues, they are able to grow.

Now in the context of a company, we have heard of so many stories, for example, Kodak story is very popular. Where at one point it was the world leader and I believe had 1,500 patents and so on. Then the external changes started happening. Though they were actually the ones who invented digital photography, they were not able to leverage it. They had the capability to lead the technology in the next wave, but they did not have the inner capacity to take decisions and deal with the changes inside the organization. The same thing happened to Blockbuster.

Organizations face the same kind of challenges, and ‘agility’ is simply their ability to understand and make a meaningful interpretation out of those external stimuli, and decide how they are going to respond back. For a large part that kind of works for me. In some cases, a visionary kind of a company which actually are not responding to it, but are initiating the change. They are the ones who are saying “we will set the pace there”. For example, I would say Tesla. Nobody is asking for a Tesla. When Tesla started making the cars, no government legislation is mandating it, no customers are asking for it, but they are setting the pace for it. iPhone changed the whole pinch and zoom and other kinds of features, it changed the definition of what the smartphones is all about. They were not following the trend. They were not responding to external changes. They were setting the change.

To me, the highest form of agility would actually be the companies that have so good understanding of the market, very strong grip on the technology and are actually setting the pace for rest of the herd to follow. So agility, I would take is that kind of thing.

Now, some companies might say “Hey, our definition of agility is so and so”. The way I look at it is if you are improving quarter on quarter, or year on year, you are agile by definition. One doesn’t have to be apologetic about not using the standard vocabulary.

To that extent, I would agree that it is not a fashion statement but ‘horses for courses’. Yes, there is a lot of abuse we see in the industry where people don’t have a very systematic or intentional approach, and in order to not be very forthright about it, they just say ‘this is our blend of agile’, which doesn’t really mean anything because they, in all honesty, are not doing service to themselves.

Signup to receive SmartQA digest that has something interesting weekly to becoming smarter in QA and delivering great products.